The Homepage of Charles Morello

For the Fallen Hokies and those that must go on. 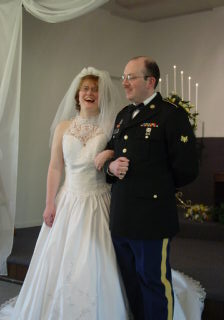 You are Visitor number

So, I have "come marching home" from "Over There." I also went and got myself married to a wonderful woman, Andrea, I'm still not certain what she sees in me. Anyway, please feel free to review our online wedding photo album (not yet complete, but we are working on it - something to do with having almost a dozen photographers running around with digital cameras) here. After a yearliving on Fort Leavenworth, Kansas (No, I did't work in, nor live in, the Army Prison - believe it or not, there is more to that post than that) where I was a part of the World Class Opposing Force of the Battle Command Training Program. Once my stint with the Army was up, we returned to Virginia, where we spent a year in Ashburn before moving to Vienna to be closer to my work at the Lockheed Martin Advanced Technology Laboratires.

Unfortunately, some of my Army and Virginia Tech classmates have laid their lives down at the altar of freedm. I pray that their sacrifice will not have been in vain.

Please take some time and look here. To you these may just be names. Some of them are friends of mine. All of them are my Comrades in Arms.

"History does not long entrust the care of freedom to the weak or the timid."
- General Dwight D. Eisenhower

I am a graduate from Virginia Tech with a Bachelor of Science in Computer Engineering. After my September 11th expirence as an EMT with the Loudoun County Volunteer Rescue Squad, I ended my time as an Embedded Software Developer at DY4 Systems and embarked on the great adventure that is the U.S.Army. I spent two years overseas (most of it in Germany) - stay tuned, I keep posting more pictures of my travels, and commentary on my experiences.


My Travel Photos and Journals

Some Quotes of Interest

"If you will not fight for right when you can easily win without bloodshed; if you will not fight when your victory will be sure and not too costly; you may come to the moment when you will have to fight with all odds against you and only a precarious chance of survival. There may be even a worse fate: You may have to fight when there is no hope of victory, because it is better to perish than to live as slaves."
-- Winston Churchill

"This is what happens when religion takes over politics. Rational negotiation becomes impossible; victory becomes a theological mandate; no end becomes feasible except conflict; and in this case, some of the actors actually want that conflict to be apocalyptic. We have to understand the fundamentalist mindset we are grappling with. It is not rational in worldly terms.
It is other-worldly - and rational only under those theological constructs. For those reasons, it is the biggest threat to Western freedom since the totalitarianisms of the last century; and easily the most mortal theat to Israel since its founding. It cannot be disarmed or reasoned with; it can only be defeated.
-- Unknown, from a blog discussing the Iranian/Israeli/Hezbulla/US situation

"The thwarted plot to blow up multiple airliners with liquid explosives, and the subsequent British ban on all carry-on luggage except for wallets and passports carried in clear plastic bags, shows that this war cannot be won on defensive. Perhaps it is possible to hermetically seal an aircraft cabin from bombers willing to die with their victims; it is not possible to seal off entire democratic countries, bursting with unguarded targets. The only way to win is to suck the air out of jihad by driving the regimes that support it out of power or out of the terror business.
-- Paul Singer

"...everyone's got reasons to claim victory in this war, and at the same time, everyone has a few things that they will want to deal with at some point in the future. The result is a cease-fire that will not hold... When a war ends without a definite winner or loser, the result will be a future war.
-– Harold C. Hutchison

Some of my favorite Links

The Mid Atlantic Battle Group We build model ships (1:144), arm them with CO2 cannons, and then try to sink each other. No, we aren't crazy.

Christian Links.
Family. Yes, there are more Morello's out there with home pages...
Friends  or rather friends who are willing to inform me of the location of their home pages...very few in fact.